This document defines common principles that will help designers create OpenTelemetry clients that are easy to use, are uniform across all supported languages, yet allow enough flexibility for language-specific expressiveness.

OpenTelemetry clients are expected to provide full features out of the box and allow for innovation and experimentation through extensibility.

Please read the overview first, to understand the fundamental architecture of OpenTelemetry.

This document does not attempt to describe the details or functionality of the OpenTelemetry client API. For API specs see the API specifications.

Note to OpenTelemetry client Authors: OpenTelemetry specification, API and SDK implementation guidelines are work in progress. If you notice incomplete or missing information, contradictions, inconsistent styling and other defects please let specification writers know by creating an issue in this repository or posting in Slack. As implementors of the specification you will often have valuable insights into how the specification can be improved. The Specification SIG and members of Technical Committee highly value your opinion and welcome your feedback.

Here is a generic design for an OpenTelemetry client (arrows indicate calls): 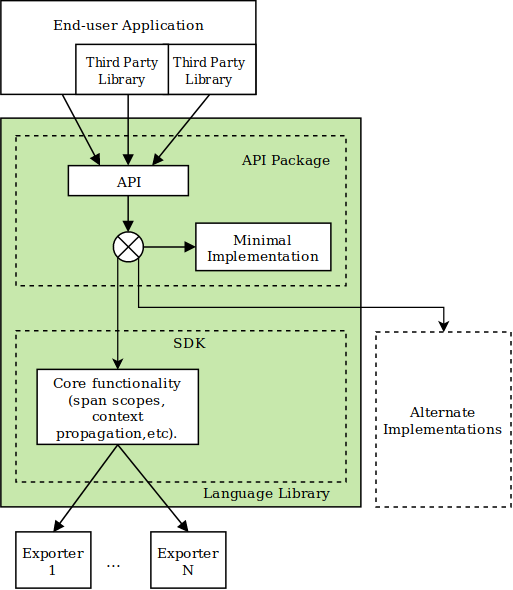 Libraries, frameworks, and applications that want to be instrumented with OpenTelemetry take a dependency only on the API packages. The developers of these third-party libraries will make calls to the API to produce telemetry data.

Applications that use third-party libraries that are instrumented with OpenTelemetry API control whether or not to install the SDK and generate telemetry data. When the SDK is not installed, the API calls should be no-ops which generate minimal overhead.

In order to enable telemetry the application must take a dependency on the OpenTelemetry SDK. The application must also configure exporters and other plugins so that telemetry can be correctly generated and delivered to their analysis tool(s) of choice. The details of how plugins are enabled and configured are language specific.

The API package is a self-sufficient dependency, in the sense that if the end-user application or a third-party library depends only on it and does not plug a full SDK implementation then the application will still build and run without failing, although no telemetry data will be actually delivered to a telemetry backend.

This self-sufficiency is achieved the following way.

The API dependency contains a minimal implementation of the API. When no other implementation is explicitly included in the application no telemetry data will be collected. Here is what active components look like in this case: 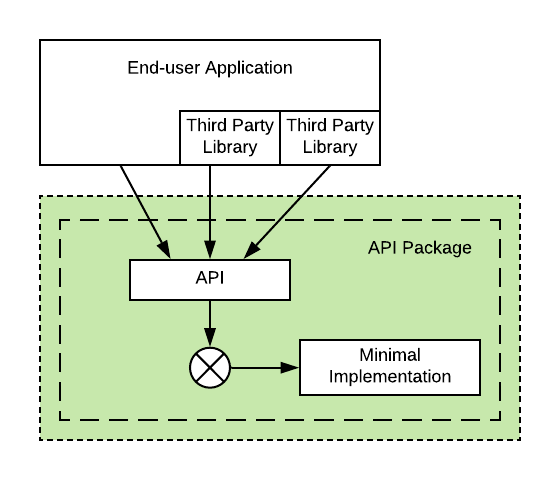 It is important that values returned from this minimal implementation of API are valid and do not require the caller to perform extra checks (e.g. createSpan() method should not fail and should return a valid non-null Span object). The caller should not need to know and worry about the fact that minimal implementation is in effect. This minimizes the boilerplate and error handling in the instrumented code.

It is also important that minimal implementation incurs as little performance penalty as possible, so that third-party frameworks and libraries that are instrumented with OpenTelemetry impose negligible overheads to users of such libraries that do not want to use OpenTelemetry too.

SDK implementation is a separate (optional) dependency. When it is plugged in it substitutes the minimal implementation that is included in the API package (exact substitution mechanism is language dependent).

SDK implements core functionality that is required for translating API calls into telemetry data that is ready for exporting. Here is how OpenTelemetry components look like when SDK is enabled: 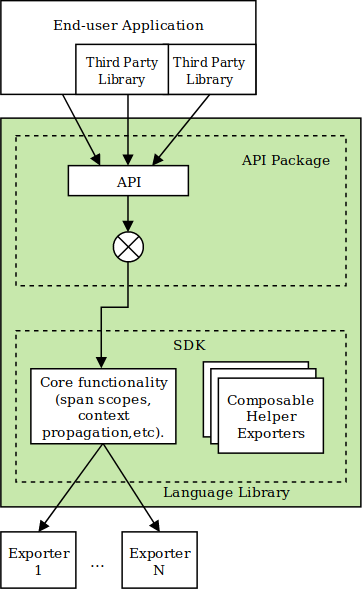 SDK defines an Exporter interface. Protocol-specific exporters that are responsible for sending telemetry data to backends must implement this interface.

SDK also includes optional helper exporters that can be composed for additional functionality if needed.

Library designers need to define the language-specific Exporter interface based on this generic specification.

Telemetry backend vendors are expected to implement Exporter interface. Data received via Export() function should be serialized and sent to the backend in a vendor-specific way.

Vendors are encouraged to keep protocol-specific exporters as simple as possible and achieve desirable additional functionality such as queuing and retrying using helpers provided by SDK.

End users should be given the flexibility of making many of the decisions regarding the queuing, retrying, tagging, batching functionality that make the most sense for their application. For example, if an application’s telemetry data must be delivered to a remote backend that has no guaranteed availability the end user may choose to use a persistent local queue and an Exporter to retry sending on failures. As opposed to that for an application that sends telemetry to a locally running Agent daemon, the end user may prefer to have a simpler exporting configuration without retrying or queueing.

If additional exporters for the sdk are provided as separate libraries, the name of the library should be prefixed with the terms “OpenTelemetry” and “Exporter” in accordance with the naming conventions of the respective technology.

Cloud vendors are encouraged to provide packages to detect resource information from the environment. These MUST be implemented outside of the SDK. See Resource SDK for more details.

The end-user application may decide to take a dependency on alternative implementation.

Note that mocking is also possible by using SDK and a Mock Exporter without needing to swap out the entire SDK.

The mocking approach chosen will depend on the testing goals and at which point exactly it is desirable to intercept the telemetry data path during the test.

This decoupling of version numbers allows OpenTelemetry client authors to make API and SDK package releases independently without the need to coordinate and match version numbers with the Specification.

TODO: How should third-party library authors who use OpenTelemetry for instrumentation guide their end users to find the correct SDK package?

Please refer to individual API specification for guidelines on what concurrency safeties should API implementations provide and how they should be documented: