This document provides an overview of the OpenTelemetry project and defines important fundamental terms.

Additional term definitions can be found in the glossary. 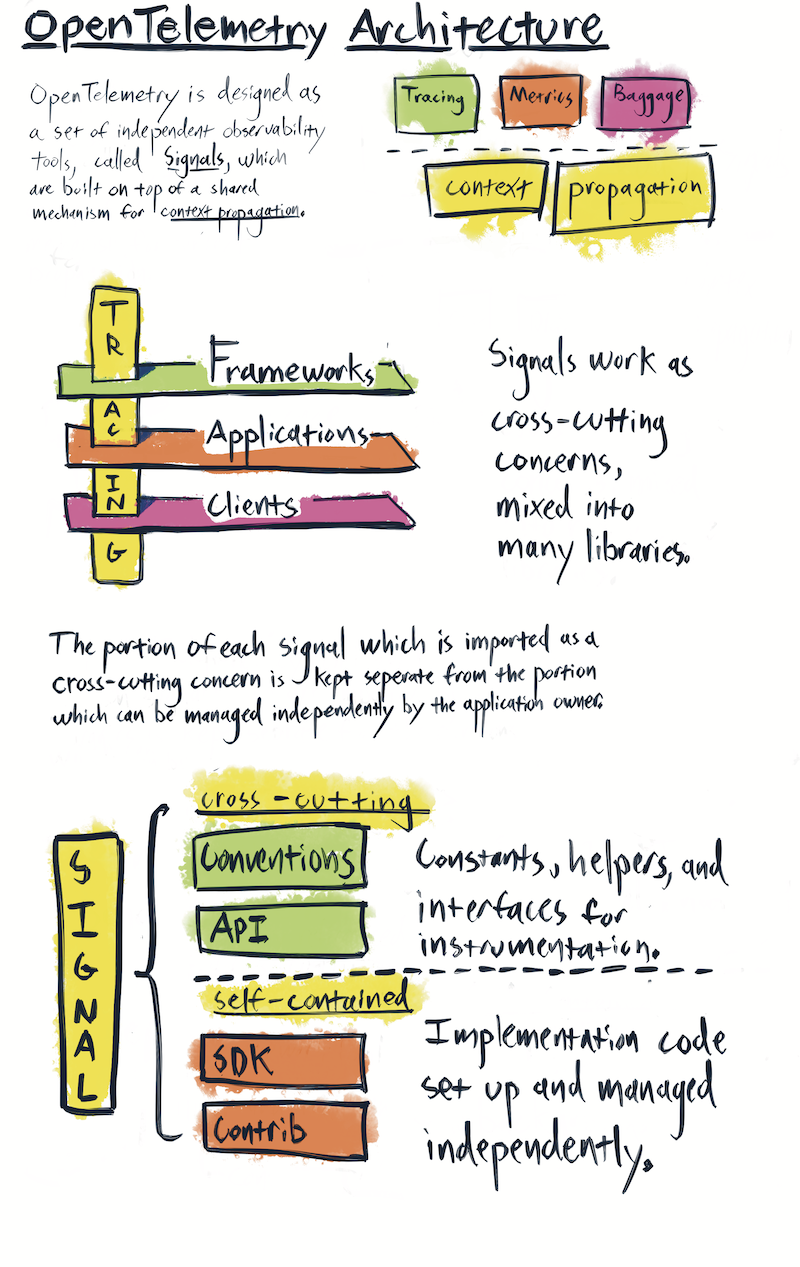 At the highest architectural level, OpenTelemetry clients are organized into signals. Each signal provides a specialized form of observability. For example, tracing, metrics, and baggage are three separate signals. Signals share a common subsystem – context propagation – but they function independently from each other.

Each signal provides a mechanism for software to describe itself. A codebase, such as web framework or a database client, takes a dependency on various signals in order to describe itself. OpenTelemetry instrumentation code can then be mixed into the other code within that codebase. This makes OpenTelemetry a cross-cutting concern - a piece of software which is mixed into many other pieces of software in order to provide value. Cross-cutting concerns, by their very nature, violate a core design principle – separation of concerns. As a result, OpenTelemetry client design requires extra care and attention to avoid creating issues for the codebases which depend upon these cross-cutting APIs.

API packages consist of the cross-cutting public interfaces used for instrumentation. Any portion of an OpenTelemetry client which is imported into third-party libraries and application code is considered part of the API.

The SDK is the implementation of the API provided by the OpenTelemetry project. Within an application, the SDK is installed and managed by the application owner. Note that the SDK includes additional public interfaces which are not considered part of the API package, as they are not cross-cutting concerns. These public interfaces are defined as constructors and plugin interfaces. Application owners use the SDK constructors; plugin authors use the SDK plugin interfaces. Instrumentation authors MUST NOT directly reference any SDK package of any kind, only the API.

The Semantic Conventions define the keys and values which describe commonly observed concepts, protocols, and operations used by applications.

Both the collector and the client libraries SHOULD autogenerate semantic convention keys and enum values into constants (or language idiomatic equivalent). Generated values shouldn’t be distributed in stable packages until semantic conventions are stable. The YAML files MUST be used as the source of truth for generation. Each language implementation SHOULD provide language-specific support to the code generator.

Some plugins, such as OTLP Exporters and TraceContext Propagators, are required by the OpenTelemetry specification. These required plugins are included as part of the SDK.

The term Contrib specifically refers to the collection of plugins and instrumentation maintained by the OpenTelemetry project; it does not refer to third-party plugins hosted elsewhere.

A distributed trace is a set of events, triggered as a result of a single logical operation, consolidated across various components of an application. A distributed trace contains events that cross process, network and security boundaries. A distributed trace may be initiated when someone presses a button to start an action on a website - in this example, the trace will represent calls made between the downstream services that handled the chain of requests initiated by this button being pressed.

Traces in OpenTelemetry are defined implicitly by their Spans. In particular, a Trace can be thought of as a directed acyclic graph (DAG) of Spans, where the edges between Spans are defined as parent/child relationship.

For example, the following is an example Trace made up of 6 Spans:

Sometimes it’s easier to visualize Traces with a time axis as in the diagram below:

A span represents an operation within a transaction. Each Span encapsulates the following state:

Represents all the information that identifies Span in the Trace and MUST be propagated to child Spans and across process boundaries. A SpanContext contains the tracing identifiers and the options that are propagated from parent to child Spans.

A Span may be linked to zero or more other Spans (defined by SpanContext) that are causally related. Links can point to Spans inside a single Trace or across different Traces. Links can be used to represent batched operations where a Span was initiated by multiple initiating Spans, each representing a single incoming item being processed in the batch.

Another example of using a Link is to declare the relationship between the originating and following trace. This can be used when a Trace enters trusted boundaries of a service and service policy requires the generation of a new Trace rather than trusting the incoming Trace context. The new linked Trace may also represent a long running asynchronous data processing operation that was initiated by one of many fast incoming requests.

When using the scatter/gather (also called fork/join) pattern, the root operation starts multiple downstream processing operations and all of them are aggregated back in a single Span. This last Span is linked to many operations it aggregates. All of them are the Spans from the same Trace. And similar to the Parent field of a Span. It is recommended, however, to not set parent of the Span in this scenario as semantically the parent field represents a single parent scenario, in many cases the parent Span fully encloses the child Span. This is not the case in scatter/gather and batch scenarios.

OpenTelemetry allows to record raw measurements or metrics with predefined aggregation and a set of attributes.

Recording raw measurements using OpenTelemetry API allows to defer to end-user the decision on what aggregation algorithm should be applied for this metric as well as defining attributes (dimensions). It will be used in client libraries like gRPC to record raw measurements “server_latency” or “received_bytes”. So end user will decide what type of aggregated values should be collected out of these raw measurements. It may be simple average or elaborate histogram calculation.

Recording of metrics with the pre-defined aggregation using OpenTelemetry API is not less important. It allows to collect values like cpu and memory usage, or simple metrics like “queue length”.

Measure describes the type of the individual values recorded by a library. It defines a contract between the library exposing the measurements and an application that will aggregate those individual measurements into a Metric. Measure is identified by name, description and a unit of values.

Measurement describes a single value to be collected for a Measure. Measurement is an empty interface in API surface. This interface is defined in SDK.

API allows to construct the Metric of a chosen type. SDK defines the way to query the current value of a Metric to be exported.

Every type of a Metric has it’s API to record values to be aggregated. API supports both - push and pull model of setting the Metric value.

Different exporters have different capabilities (e.g. which data types are supported) and different constraints (e.g. which characters are allowed in attribute keys). Metrics is intended to be a superset of what’s possible, not a lowest common denominator that’s supported everywhere. All exporters consume data from Metrics Data Model via a Metric Producer interface defined in OpenTelemetry SDK.

Because of this, Metrics puts minimal constraints on the data (e.g. which characters are allowed in keys), and code dealing with Metrics should avoid validation and sanitization of the Metrics data. Instead, pass the data to the backend, rely on the backend to perform validation, and pass back any errors from the backend.

Log Data Model defines how logs and events are understood by OpenTelemetry.

In addition to trace propagation, OpenTelemetry provides a simple mechanism for propagating name/value pairs, called Baggage. Baggage is intended for indexing observability events in one service with attributes provided by a prior service in the same transaction. This helps to establish a causal relationship between these events.

While Baggage can be used to prototype other cross-cutting concerns, this mechanism is primarily intended to convey values for the OpenTelemetry observability systems.

These values can be consumed from Baggage and used as additional attributes for metrics, or additional context for logs and traces. Some examples:

For backward compatibility with OpenTracing, Baggage is propagated as Baggage when using the OpenTracing bridge. New concerns with different criteria should consider creating a new cross-cutting concern to cover their use-case; they may benefit from the W3C encoding format but use a new HTTP header to convey data throughout a distributed trace.

Resource captures information about the entity for which telemetry is recorded. For example, metrics exposed by a Kubernetes container can be linked to a resource that specifies the cluster, namespace, pod, and container name.

Resource may capture an entire hierarchy of entity identification. It may describe the host in the cloud and specific container or an application running in the process.

Note, that some of the process identification information can be associated with telemetry automatically by OpenTelemetry SDK or specific exporter. See OpenTelemetry proto for an example.

All of OpenTelemetry cross-cutting concerns, such as traces and metrics, share an underlying Context mechanism for storing state and accessing data across the lifespan of a distributed transaction.

OpenTelemetry uses Propagators to serialize and deserialize cross-cutting concern values such as Spans (usually only the SpanContext portion) and Baggage. Different Propagator types define the restrictions imposed by a specific transport and bound to a data type.

The OpenTelemetry collector is a set of components that can collect traces, metrics and eventually other telemetry data (e.g. logs) from processes instrumented by OpenTelemetry or other monitoring/tracing libraries (Jaeger, Prometheus, etc.), do aggregation and smart sampling, and export traces and metrics to one or more monitoring/tracing backends. The collector will allow to enrich and transform collected telemetry (e.g. add additional attributes or scrub personal information).

The OpenTelemetry collector has two primary modes of operation: Agent (a daemon running locally with the application) and Collector (a standalone running service).

The inspiration of the project is to make every library and application observable out of the box by having them call OpenTelemetry API directly. However, many libraries will not have such integration, and as such there is a need for a separate library which would inject such calls, using mechanisms such as wrapping interfaces, subscribing to library-specific callbacks, or translating existing telemetry into the OpenTelemetry model.

A library that enables OpenTelemetry observability for another library is called an Instrumentation Library.

An instrumentation library should be named to follow any naming conventions of the instrumented library (e.g. ‘middleware’ for a web framework).

If there is no established name, the recommendation is to prefix packages with “opentelemetry-instrumentation”, followed by the instrumented library name itself. Examples include: