Versioning and stability for OpenTelemetry clients

This document defines the stability guarantees offered by the OpenTelemetry clients, along with the rules and procedures for meeting those guarantees.

Each language implementation MUST take these versioning and stability requirements, and produce a language-specific document which details how these requirements will be met. This document SHALL be placed in the root of each repo and named VERSIONING.

Versioning and stability procedures are designed to meet the following goals.

Never create a dependency conflict between packages which rely on different versions of OpenTelemetry. Avoid breaking all stable public APIs. Backwards compatibility is a strict requirement. Instrumentation APIs cannot create a version conflict, ever. Otherwise, the OpenTelemetry API cannot be embedded in widely shared libraries, such as web frameworks. Code written against older versions of the API MUST work with all newer versions of the API. Transitive dependencies of the API cannot create a version conflict. The OpenTelemetry API cannot depend on a particular package if there is any chance that any library or application may require a different, incompatible version of that package. A library that imports the OpenTelemetry API should never become incompatible with other libraries due to a version conflict in one of OpenTelemetry’s dependencies. Theoretically, APIs can be deprecated and eventually removed, but this is a process measured in years and we have no plans to do so.

Allow for multiple levels of package stability within the same release of an OpenTelemetry component. Provide maintainers a clear process for developing new, experimental signals alongside stable signals. Different packages within the same release may have different levels of stability. This means that an implementation wishing to release stable tracing today MUST ensure that experimental metrics are factored out in such a way that breaking changes to metrics API do not destabilize the trace API packages.

The development of each signal follows a lifecycle: experimental, stable, deprecated, removed.

The infographic below shows an example of the lifecycle of an API component. 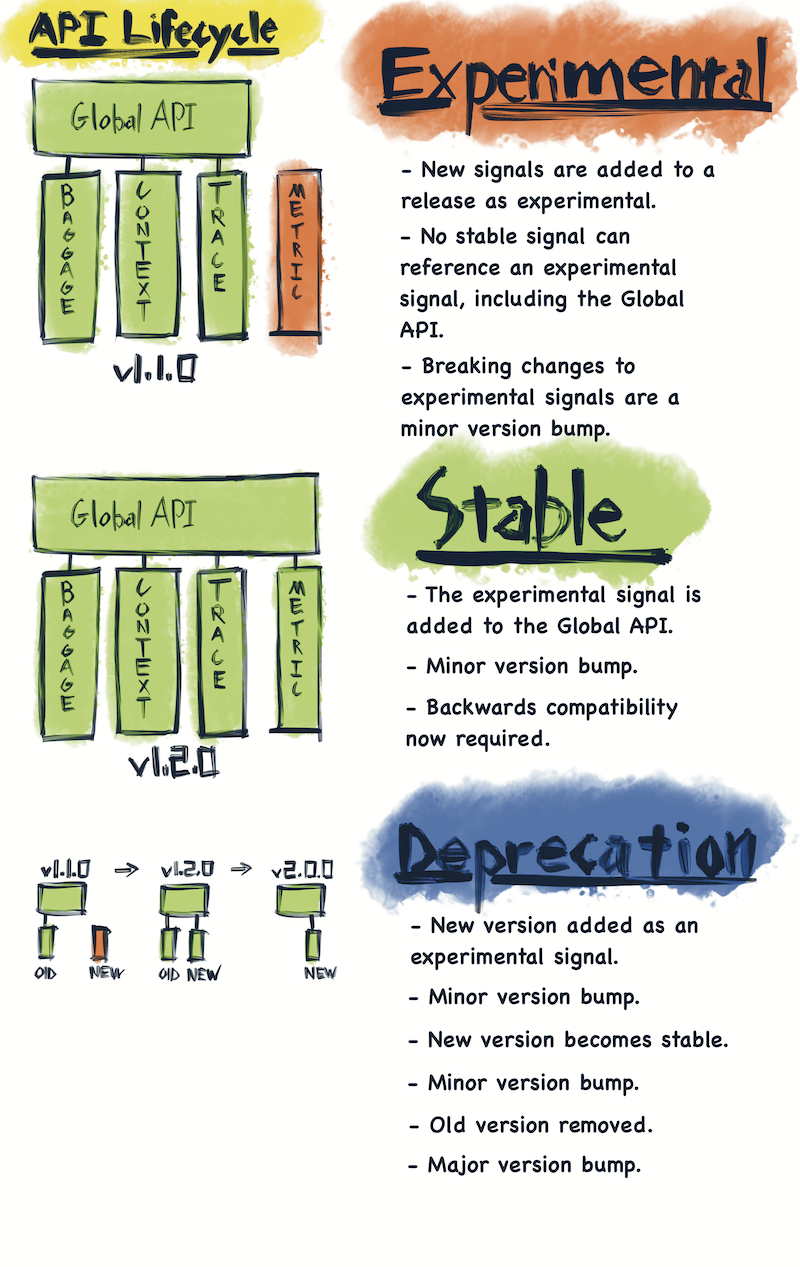 Signals start as experimental, which covers alpha, beta, and release candidate versions of the signal. While signals are experimental, breaking changes and performance issues MAY occur. Components SHOULD NOT be expected to be feature-complete. In some cases, the experiment MAY be discarded and removed entirely. Long-term dependencies SHOULD NOT be taken against experimental signals.

OpenTelemetry clients MUST be designed in a manner that allows experimental signals to be created without breaking the stability guarantees of existing signals.

OpenTelemetry clients MUST NOT be designed in a manner that breaks existing users when a signal transitions from experimental to stable. This would punish users of the release candidate, and hinder adoption.

Terms which denote stability, such as “experimental,” MUST NOT be used as part of a directory or import name. Package version numbers MAY include a suffix, such as -alpha, -beta, -rc, or -experimental, to differentiate stable and experimental packages.

Once an experimental signal has gone through rigorous beta testing, it MAY transition to stable. Long-term dependencies MAY now be taken against this signal.

Once a signal component is marked as stable, the following rules MUST apply until the end of that signal’s existence.

Backward-incompatible changes to API packages MUST NOT be made unless the major version number is incremented. All existing API calls MUST continue to compile and function against all future minor versions of the same major version.

An existing API call MAY be extended without incrementing the major version number if the particular language allows to do it in a backward-compatible manner.

To add a new parameter to an existing API call depending on the language several approaches are possible:

There may be other ways to extend existing APIs in non-breaking manner. Language maintainers SHOULD choose the idiomatic way for their language.

Public portions of SDK packages MUST remain backwards compatible. There are two categories of public features: plugin interfaces and constructors. Examples of plugins include the SpanProcessor, Exporter, and Sampler interfaces. Examples of constructors include configuration objects, environment variables, and SDK builders.

Plugins, instrumentation, and other contrib packages SHOULD be kept up to date and compatible with the latest versions of the API, SDK, and Semantic Conventions. If a release of the API, SDK, or Semantic Conventions contains changes which are relevant to a contrib package, that package SHOULD be updated and released in a timely fashion. (See limitations on instrumentation stability in Telemetry Stability.) The goal is to ensure users can update to the latest version of OpenTelemetry, and not be held back by the plugins that they depend on.

Changes to telemetry produced by OpenTelemetry instrumentation SHOULD avoid breaking analysis tools, such as dashboards and alerts. To achieve this, while allowing the evolution of telemetry and semantic conventions, OpenTelemetry relies on the concept of Telemetry Schemas.

In addition to the 3 types of changes described above there are certain types that are always allowed. Such changes do not need to be described (and are not described) by schema files. Here is the list of such changes:

Any other changes to semantic conventions are currently prohibited. Other types of changes MAY be introduced in the future versions of this specification. This is only allowed if OpenTelemetry introduces a new schema file format that is capable of describing such changes.

For stability of telemetry produced by instrumentation see the Telemetry Stability document.

Signals MAY eventually be replaced. When this happens, they are marked as deprecated.

Signals SHALL only be marked as deprecated when the replacement becomes stable. Deprecated code MUST abide by the same support guarantees as stable code.

Support is ended by the removal of a signal from the release. The release MUST make a major version bump when this happens.

A note on replacing signals

Note that we currently have no plans for creating a major version of OpenTelemetry past v1.0.

For clarity, it is still possible to create new, backwards incompatible versions of existing signals without actually moving to v2.0 and breaking support.

For the purposes of versioning, all code within a component MUST treated as if it were part of a single package, and versioned with the same version number, except for Contrib, which may be a collection of packages versioned separately.

Exception: in some languages, package managers may react poorly to experimental packages having a version higher than 0.X. In these cases, experimental signals MAY version independently from stable signals, in order to retain a 0.X version number. When a signal becomes stable, the version MUST be bumped to match the other stable signals in the release.

Most changes to OpenTelemetry clients result in a minor version bump.

Patch versions make no changes which would require recompilation or potentially break application code. The following are examples of patch fixes.

Each language implementation SHOULD define how the removal of a supported language/runtime version affects its versioning. As a rule of thumb, it SHOULD follow the conventions in the given ecosystem. 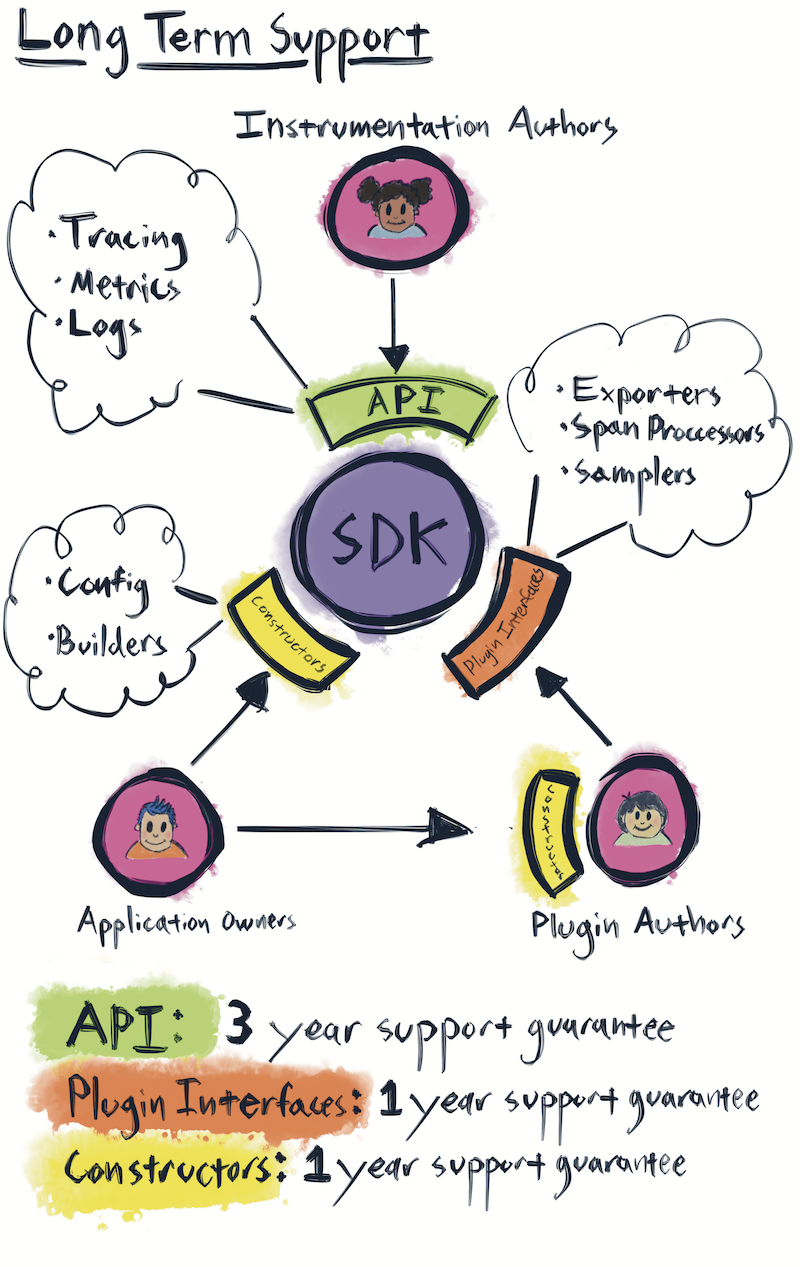 Major versions of the API MUST be supported for a minimum of three years after the release of the next major API version. API support is defined as follows.

SDK stability, as defined above, will be maintained for a minimum of one year after the release of the next major SDK version.

Contrib stability, as defined above, will be maintained for a minimum of one year after the release of the next major version of a contrib package.

The term “OpenTelemetry GA” refers to the point at which OpenTracing and OpenCensus will be fully deprecated. The minimum requirements for declaring GA are as followed.